There Be Squalls Ahead!

Kevin Yee from Miceage.com not only fisks Michael Eisner's retirement letter to the Disney Board...

[EISNER:] "As to our current performance, we are and should be proud of how we have managed and strengthened the Company during difficult times...I have been told by you, by friends, but mostly by outside observers, that it is quite extraordinary that we have been able to remain focused on our objectives and have managed to run the Company so well amidst the distractions that have taken huge chunks of time during the past several years.

[YEE:] What distractions? I'll assume he doesn't mean 9/11 or the recession which followed. Those aren't distractions... those are the things a CEO of a major multinational is supposedly paid big bucks to strategize about. I wonder if maybe the "distractions" are the dissident shareholders out for Eisner's head? The mobilized fan movement trying to oust the Big Cheese himself?"

...but also dissects Roy Disney and Stanley Gold's counter-letter to the same Board of Directors on which they used to serve...

[DISNEY/GOLD:] "While Mr. Eisner's announcement at first blush looks like a major change, it is in truth mere window dressing. What he has really proposed is a scheme to arrogate the authority of the Board and maintain the status quo at the Company's expense.

Press accounts suggest that Mr. Eisner intends to ask you to install him as chairman after he relinquishes the CEO title. In other words, his "succession plan" is for a company led by Michael Eisner and his obedient lieutenant, Bob Iger, to be handed over to . . . Michael Eisner and Bob Iger. Do you really think that this result will be tolerated by stockholders or will satisfy anyone that you have carried out your responsibilities? Any arrangement that permits Mr. Eisner to remain as Chairman after relinquishing his position as CEO is contrary to best governance practices. Disney stockholders deserve exemplary governance from their directors."

[YEE:] Again, Save Disney puts the burden squarely onto the backs of the Directors. In essence, Save Disney is backing off the calls for Eisner's head, and now focusing only on the Directors. Should they remain in Eisner's pocket, Roy and Stanley will attack them instead.

Finally, the gauntlet is thrown down:

"[DISNEY/GOLD:] We intend to make it clear - to our fellow stockholders, to Disney Cast Members and to other Disney constituencies - that we will strongly support Directors who want to move Disney forward by requiring Mr. Eisner to leave as CEO and as a Director no later than the 2005 Annual Meeting and who are committed to the Board conducting an immediate search for a new CEO. By the same token, we will oppose with unrelenting vigor Directors who continue to support drift, delay, and decay. Should the Board not take the actions proposed above - immediately engaging an independent executive recruiting firm to conduct a worldwide search for a talented CEO and concurrently announcing that Michael Eisner will leave the Company at the conclusion of that search - we intend to take our case directly to our fellow stockholders and propose an alternate slate of directors committed to moving the Company forward aggressively.

[YEE:] There is it. The cards are on the table. If they don't see positive results, Roy and Stanley are threatening to do what has long been rumored: try to take over the Disney Board of Directors by a general election from the actual owners of the company, the shareholders. Not coincidentally, this same election, if successful for Roy and Stanley, would take away the jobs from the current Directors. Thus, those Directors now have personal motivation to finally DO something. 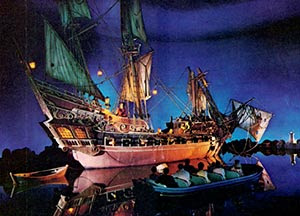 This continuing series of battles that has raged between the embattled Michael Eisner and his disgruntled shareholders, led by Walt's nephew Roy Disney and his ally Stanley Gold, has raged hot and cold for almost a year now since Disney and Gold resigned from the Disney Board of Directors last fall.

Eisner was hired in 1984 to resurrect Disney from the clutches of not only greedy takeover-minded corporations, but also a creeping creative entropy within the Company. For that he should be, and has been, thanked and given all accolades. But in the last ten years, his vision for Disney has increasingly been focused on the bottom line and pleasing big-budget shareholders, at the expense of all the people who've trusted the Disney company over the years to exemplify the best of American culture. Deteriorating theme park maintenance, security and creativity; saturation of direct-to-video sequels and decreasing quality of Feature Animation; expensive traditional media acquisitions such as ABC/Capitol Cities and ESPN that overall required subsidization from Disney's other, more profitable companies...not to mention the perpetuation and growth of an endless layer of soulless, in-over-their-heads middle management bureaucracy....all these have led those dissatisfied with the transformation of The Walt Disney Company into just another media conglomerate to storm the castle, so to speak.

Yee compares the Eisner/Disney-Gold battle to the Pirates of The Caribbean attraction at Walt Disney World. Until someone or something gives, the ride will cycle, endlessly, replaying the same skirmishes over and over.

UPDATE: I can't believe I forgot this was Sunday!