The latest episode of my Knoxville theatre podcast, The Sounds of Knoxville Theatre, is online.

I'd like to extend a special invitation to those of you who haven't heard my podcast - if you have any interest in theatre in the Knoxville and surrounding counties, take a listen to the podcast.  Every week (or so) I outline what's coming up in the theatre productions and auditions around the area, and usually have an interview with someone involved with Knoxville theatre.  Enjoy!

Email ThisBlogThis!Share to TwitterShare to FacebookShare to Pinterest
Labels: Podcasts

Scenes From a Hat

Email ThisBlogThis!Share to TwitterShare to FacebookShare to Pinterest
Labels: Bringing the Funny

Flipping randomly through my Netflix Streaming Queue, I came upon 24.  The early-to-mid-2000's series about Jack Bauer and the fictional Counter-Terrorism Unit (CTU) figured heavily on my weekly must-see shows of that time period.  In fact, I already own several seasons on DVD.

I remember when 24 first premiered, it was only a few weeks after 9/11.  The premiere episode included an airplane bombing - naturally, that the producers considered cutting the sequence or postponing the episode.  Eventually it aired, uncut, and the series went on for another 7 seasons.

24 associated, fairly or not, with the Bush era of heightened awareness of our state of security, and the steps we as a country would take to secure our own safety, both home and abroad.  The producers of the show swung to both ends of the spectrum throughout its run, and the character of Bauer went with it.  Torture, terrorism, two (!) separate nuclear explosions and numerous other attacks from both foreign and domestic ne'er-do-wells served as an intentional/unintentional commentary on our country's own feelings toward its own increased security.

While it can mostly be chalked up to coincidence that the show wrapped up its production only a year or so into President Obama's term (8 seasons is enough for almost any show, especially one that thrives on running constantly in high gear) I wonder what it would have been like during the rest of Obama's term.  With the killing of Osama Bin Laden and the general relaxation of the constant fear of a repeat massive terrorist attack on American soil (not to mention the effects of the Arab Spring), the tenor of the country has changed a bit in that regard.*

Getting back to the original point - in the 30 minutes or so I was on Netflix, I flipped around from episode to episode, season to season, watching bits and pieces and memorable scenes.  I re-watched the assassination of President Palmer, retired spies Tony and Michelle, tragic tech Edward, and others. But, at least at this point, I have no plans to go back and re-watch entire seasons.  This is coming from a guy who went back and re-watched the entire 7 season run of The West Wing (with my son), all 5 seasons of The Dick Van Dyke Show and looks forward to a few years down the road of re-watching all 5 seasons of LOST in their entirety.  I also plan at some point to go back and re-live The X-Files, Picket Fences, Crime Story and probably several others.  Why such an aversion to 24?

I think it relates, in a way, to my ongoing aversion to our annual national Rip Off The Scab Day (also knows as September 11th).  Ever year on the anniversary of the 9/11 attacks, we voluntarily re-immerse ourselves in the glamorous mourning of the events of that day.  Jason Bailey of Slate writes:


These programs and others are a part of our continuing attempt to grapple with 9/11, and they raise a simple but difficult question: Why do we keep doing this to ourselves? We watch that horrible morning play itself out again, year after year, one inevitable event after another, helplessly gasping, crying, or screaming at our televisions, knowing that nothing we think or do or say will change a thing. The second plane will crash into the second tower, which will collapse 56 minutes later, and then the first tower will collapse 29 minutes after that. Watching those buildings crumble and take the lives of thousands of Americans is something akin to watching a snuff film. Reliving it all—our last moments of cheery obliviousness, the confusion of those first reports, the utter despair of watching those buildings crumble—is borderline masochistic. Isn’t it?

I feel the same way.  While I'm all for memorials and the occasional tribute, the constant popular re-airing of the footage of that day serves as a voluntary immersion again in all the emotions of 9/11/01.  Most were negative, some were positive, all were strong.  And I think that's what keeps me from going back to 24 - I've lived that life, I've followed those characters, they've drawn me into their world.  Other than the occasional foray to watch a favorite scene again, I have no desire to rip off those scabs once again.  Let it heal.  And move on.

At the end of various episodes in which a major character died, the producers silenced the traditional ticking clock in honor of the deceased.  I think that's a good idea.

* - It would be an interesting comparison to examine the similarities between The West Wing and how it reflected the Clinton White House, moving into the Bush White House, and 24, moving from Bush to Obama.  And how those two TV series reflected and were each shaped by the person occupying the (real) White House at the time.  For 6.9 seasons of its 7 seasons, The West Wing had one duly elected and re-elected president (Jed Bartlett), and another just elected at the very end (Matt Santos).  24 had a succession of Presidents and Vice Presidents over its 8 year run - from the extremely virtuous, yet unre-electable David Palmer to the villainous Charles Logan, at least 3 others in between of different flavors.  A better political sociologist can tackle that one :)

Email ThisBlogThis!Share to TwitterShare to FacebookShare to Pinterest
Labels: 24, Lost, The West Wing

But when you think of the alternative, you sometimes just have to grit your teeth and bear it.  I still find it amazing this kind of thing exists in the 21st century, and it's even more disheartening to read this:


“Tennessee is one of the states that has a strong presence of all of the major white supremacist groups active right now,” [Anti-Defamation League director of investigative research Mark] Pitcavage said....

Tennessee, where the KKK was formed in 1865, continues to play a key role in re-energizing the white supremacist movement. Pitcavage said a confluence of two factors — the election of Barack Obama and the economy — is driving the white supremacist resurgence, connected to a spike in violent incidents including a shooting at the Sikh Temple of Wisconsin that left six dead, including the shooter, Wade Page, a self-identified neo-Nazi.

But a foiled terrorist plot in Tennessee may have lit the first spark, he said.

In 2008, during Obama’s first presidential campaign, Bells, Tenn., resident Daniel Cowart, 20, and his friend Paul Schlesselman, 18, from Arkansas — both self-described white power skinheads — were caught before they could carry out an assassination attempt against Obama and 88 African-Americans at a school in West Tennessee.

I wonder sometimes what kind of sea change could possibly be hoped for, in that those citizens who actively promote white supremacy, or racial hatred of any kind can find an reason to see beyond color.  What has to happen to change these peoples' hearts and minds?
Posted by Barry Wallace at 12:31:00 AM No comments:

Email ThisBlogThis!Share to TwitterShare to FacebookShare to Pinterest
Labels: America

The Eagles are Wild, man. 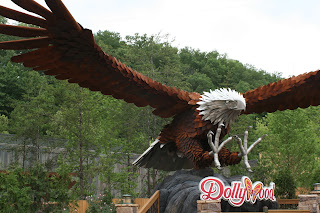 The management and staff of Dollywood are top notch..Here's a couple of great podcast interviews From The Season Pass Podcast with Marketing Director Pete Owens:
Not to be outdone, here's my podcast review of Opening Day of Dollywood's 2012 Season, along with Rex and The Beast's commentary on Wild Eagle, at RexandtheBeast.com: Audio Journeys Podcast #1203

I think it's about time to drag the old girl out of mothballs...

Who still follows me?  Who still has an active blogroll or RSS feed?  Comment below if you're seeing this.

My company has allowed access to Blogger, so I will be able to blog from work again. Since the web and social media are my job, and part of being a successful online advocate for your brand is to have a strong online presence, I don't feel it's out of line to say personal blogging can enhance some people's professional standing in the digital field.

Social influence is a key element in today's marketing strategies, and it's important for the people behind the brands that are in charge of publicizing their good and services to be trusted sources of information.  Not just the company name, but the people behind the company name - they're the ones that will help sell the name.  So the more online influence a marketer her - personal, public online influence - the more reliable, trusted and influential they'll appear to the outside world.

At least, that's my understanding.

So expect more posts from me, but perhaps fewer daily observations about my life, and more commentary on the professional and special interest topics that catch my eye.  Obviously, healthcare will be a large part of that - particularly acute care services.  But since I'm no doctor (and don't play one on TV) don't expect any medical advice or extensive cross-linking - more about how online, digital and social media can enhance the public's perception of healthcare and how it is received. I think that's a worthwhile goal.

Meanwhile, of course my interest in theatre will continue and I'm sure I will post about my latest exploits upon (and behind, and under) the boards.  Although, you can find more on a regular basis on my podcast, "Sounds of Knoxville Theatre" (http://knoxvilletheatre.blogspot.com).

Also, I'm sure my great love and appreciate for theme parks will show through, especially Disney parks, so expect some comments on the latest developments in Orlando and Anaheim.

Lastly, my wonderful family will surely crop up from time to time, but for privacy's sake I will continue to refer to them anonymously.  For those who have perhaps lost touch in the last few years I've been off the blog circuit, my son, "BrainyBoy" is no longer a boy - he's a young man.  A junior in High School who just today took his first solo drive to school and back.  In my car.  And arrived unscathed there and back home later in the day.   My daughter is "Tink" and is in the eighth grade.  Her resemblance to the 1950's cartoon character has lessened not a bit.  My wife remains my inspiration, my confidant, my partner in crime, and my biggest critic :) And that's not a bad thing!  We anxiously await our 20th anniversary together, with a Carnival Cruise.  I'm sure that will be mentioned as well.

Thank you for your indulgence - again, leave a comment for me, please, if you read this.  Glad to see you.

The Inn is open.