Recently I entered a competition on Slate.com to write a 500-word short story based on an every-day object, in conjunction with this project:

The creators of this project went out to various flea markets, etc and bought up dozens of odd knickknacks and curios, then asked various writers to make up short stories about what the possible history of each item might be. Then the items were to be sold, with the story, on eBay.

The object connected to the Slate.com contest was: 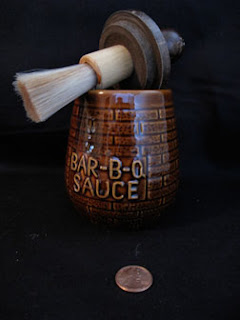 My entry didn't win, but I wanted to post it here for your enjoyment.

Note: Be warned - my taste in short stories tends to run to the macabre and Stephen King-esque...

Humming to herself, Sarah prepared the restaurant for the day’s customers. When her father was alive he had boasted many times that his heart and soul were in every meal that was served here, and all the customers loved him. Every table, every window, every well-used pot in the kitchen was a part of him. He had been the king of barbecue for fifty-five years, and never was there a restaurant more infused with the soul of its creator.

People who had eaten here for years did know her, but they were more in love with her father. It was his charisma and culinary skills that attracted customers from miles around, not her light brown hair, sweet smile and attractive figure. But that was how it always had been.

She picked up a tray of washed BBQ Sauce jars, each with its own personal brush. Her father had trusted his patrons to lather on the sauce at their preferred amount - not too little and not too much. The ironic fact that he had always told her how much she should put on her own was not lost to her.

Walking the tray of jars to the kitchen, she proceeded to fill each with the secret mixture her father had always cherished. Each morning she had been expected to fill thirty jars, holding exactly the same amount of sauce. She would do the same this morning – with one small exception.

Once in a fit of creative experimentation while her father was on vacation, she had added a few ingredients. In her mind it needed a little “kick”. Some oregano, a little paprika, even some cilantro gave a well-needed update to the classic sauce. The customers, however, had not agreed and complained to her father when he got back. He docked her pay for a month.

It was time now for another new addition to the sauce.

She capped all the jars except one. Examining it, she was sure it was the one she wanted – still glossy from the original glazing, brush clean. Slightly bigger than the rest, this is the one she’d made herself that her father had copied – without credit – by commissioning a local potter to make the other twenty-nine. It was into this one her new special ingredient would be added.

“There, daddy,” she thought. “You’re going to be part of your customers’ meals even after you’re gone.” Sealing the urn and replacing it under the sink, she picked up the tray and moved into the dining area to disperse the jars.
Posted by Barry Wallace at 11:02:00 PM No comments: