This month the challenge is "with someone". I've got some good ideas for this month, including "with" other bloggers, my family, and who knows who else. But for the first one I'm going to go back in time.

In 1972 I was 5 years old, and two of my absolute favorite things to do in the world were watch H.R. Pufnstuf and Lidsville on Saturday mornings, and to go to Six Flags over Georgia in Atlanta every summer with my family.

For a few years, those worlds collided. Sid & Marty Krofft, creators of H.R. Pufnstuf and Lidsville had a Puppet Theatre in Six Flags, and joy of joys, the characters from the shows would occasionally walk around the park.

Here I am with my hero, the Mayor of Living Island himself, H.R. Pufnstuf. 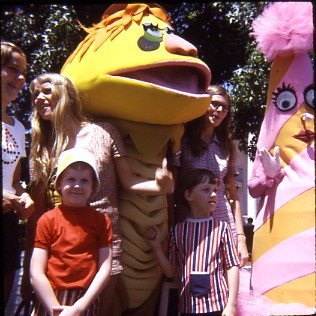 That's me in the red shirt and white hat. Also seen "horning" in on the action is Ms. Party Hat from Lidsville.

I also got pretty chummy with The Colonel from Lidsville as well. 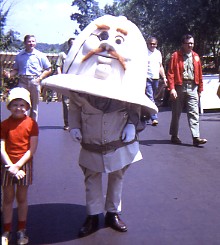 Apparently I had one pose for all pictures. I remember good ole' Colonel scaring the good old' bejeebus out of me, so I stood as far from him as I could but still stay in the shot.

You know, watching those guys on TV is great. Seeing them in person, they just look like misshapen mutants...

I'm happy my parents kept the old photos, and transferred them to CD so I can enjoy them forever.

Since I'm in a charitable, nostalgic mood, here's a picture I found just for my former roommate Gary and and his brother Phillip: 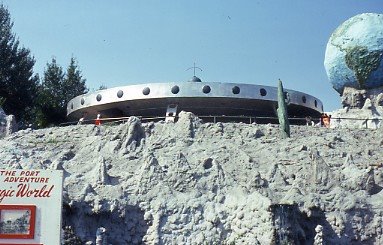 Magic World in Pigeon Forge, circa 1976. Eat your hearts out, guys...I was there first.

Note: In searching the CD's for these particular pictures, I found a bunch of 1982 World's Fair pictures. I'll be posting them on my 25th Anniversary Site soon.
Posted by Barry Wallace at 11:20:00 PM

Email ThisBlogThis!Share to TwitterShare to FacebookShare to Pinterest
Labels: SPC