I, For One, Can't Wait For "Mr. Toad's Wild Ride: The Motion Picture" 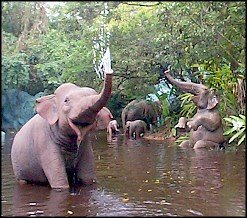 The Hollywood Reporter notes that Disney's stepping up its effort to get a Jungle Cruise movie into theaters.

Disney, of course, created one of the most profitable franchises in movie history with its Pirates of the Caribbean films. But it bombed with flicks based on Haunted Mansion and Country Bear Jamboree. For Jungle Cruise, the HR reports that Disney's enlisted the executive producers of the TV show "Smallville" to write the script. (For PotC, Disney brought aboard the writers of "Shrek.")

How long before they decide to make a movie out of "The Enchanted Tiki Room" and complete the Adventureland Trifecta?

However, I don't think they can ever make an "It's a Small World" motion picture. Happy children from all over the world, singing together as one global community of peace, love and harmony? Talk about Fantasyland.

Maybe if Stitch made a cameo and ruined things...
Posted by Barry Wallace at 4:43:00 PM