Celebrate the 25th Anniversary of the 1982 World's Fair

Justin Griffin, an I.T. worker at U.T, has a great guest editorial in Sunday's Knoxville News Sentinel about how Knoxville is dropping the ball in preserving the memory of the 1982 World's Fair.

In 1982, when the World's Fair came to town, I was only 10 years old and unfortunately too young to realize the importance of the event. To me, it was just a fun time that frequently resulted in aching legs.

Now, almost 25 years later, I see it as a shining point in Knoxville's history. However, since the World's Fair closed, it seems Knoxville began the process of forgetting rather quickly.

In my newfound enthusiasm, I have tried to rally some interest in recognizing the 25th anniversary of the World's Fair May 1, 1982, without much success. In fact, it seems most people I talk to around town would like to put this event out of their minds.

At first, I thought it had to do with the Jake Butcher scandal that happened after the fair ended, but now it seems to be something deeper.

I heard that, during discussions of what to do with the Sunsphere, the architectural hallmark of the World's Fair, it was stated that the heating and cooling bill for using the structure would be nearly prohibitively expensive. It has been years since anyone could travel to the observation deck of this unique structure, and the once well-used Tennessee Amphitheater, standing just beside it, is now kept inside a fence, slowly rotting.


If the Sunsphere joins the U.S. Pavilion and the amphitheater on the junk heap, it will be clear that the people of Knoxville stood up and with a singularly clear voice stated, "We don't care."

If that happens, it will be a truly sad day for children growing up in this city. As for me, I will lose a great deal of respect for my hometown. 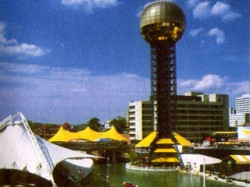 As evidenced in my list below, I have a very special place in my heart for the 1982 World's Fair. I was 15 years old and practically spent my whole summer there. To think Knoxville will just let this 25th annivesary pass by is deplorable.

While the park is nice and well maintained, some of the relics of the fair lie in ruins - the Tennessee Ampitheatre, which once played to celebrities such as Red Skelton, lies rotting. The US Pavilion fell under the wrecking ball long ago.

I was too young to even notice the financial scandals and other malfeasance going on around the Fair. Maybe all that still leaves a bad taste in peoples' mouths. Maybe there's still lingering political bad-feelings. Maybe it's just the good-old typical Knoxville apathy. I don't know.

But I do know the 1982 was the best thing to happen to Knoxville in the 20th Century, and it deserves to be commemorated.

I'd love to help Justin and lead/help lead a Knoxville are blogger community initiative to get things moving again on this. What do you say, Michael? Cathy/Doug? Tish? Teresa? Uncle? Randy? Dare I say, Glenn?

UPDATE: I've started a new site, Worlds Fair 25, as a starting place for garnering support, remembrances and other information about a 25th Anniversary celebration. If anybody would be interested in helping administrate it, let me know.

I also will begin working on a logo/button for supporters to put on their sites. Again, if anyone is interested in putting something together or has any suggestions let me know.
Posted by Barry Wallace at 11:44:00 PM