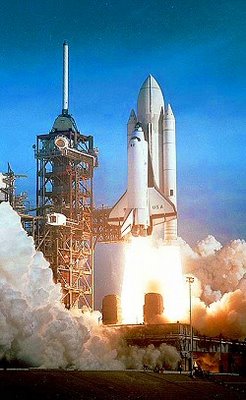 Today is the 25th Anniversary of the first space shuttle launch.

On April 12, 1981, the Space Shuttle Columbia lifted off from Cape Canaveral, Florida. I remember distinctly the TV coverage of that day, and as the shuttle cleared the tower someone on television softly encouraging under their breath, "Fly...fly like an eagle." That has stuck with me ever since.

I had a big poster of the Columbia launch on my wall growing up for a long time. I wonder what ever happened to it..

22 years later we came home from an overnight trip to see footage of the remains of Columbia streaking across the Texas sky.

It's time to start again, NASA. Re-engineer, re-imagine. Call John Lasseter if you have to. We've waited too long - to the moon, to Mars, let's get it on.