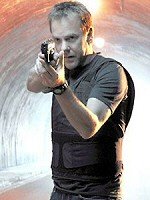 Thank you to, erm, Jack Bauer for graciously allowing me to host the Carnival of Bauer this week.

In honor of most wondrous Commander-in-Chief (no, not Jed Bartlett or Matt Santos), this week's laborious list of lithesome links and luscious labels the Carnival of Logan.

///EYES ONLY
///PRESIDENT OF THE UNITED STATES
///RE: INFORMATION YOU REQUESTED

PRESIDENT LOGAN - PER YOUR REQUEST, I HAVE COMPILED A LIST OF WHAT RELEVANT SITES ARE SAYING REGARDING THE RECENT TURN-AROUND IN YOUR ADMINISTRATION. AS YOU CAN SEE THE PUBLIC IS GREATLY CONCERNED ABOUT YOUR LEADERSHIP AND REVILES YOUR NAME AT EVERY OPPORTUNITY. REGARD FOR MY FORMER STUDENT, JACK BAUER, REMAINS HIGH AND BOTHERSOME. REQUEST INSTRUCTIONS TO PROCEED...