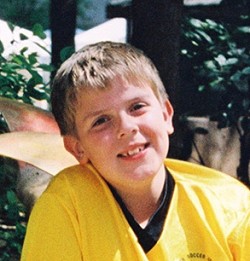 I stopped at Crouch's Florist on Kingston Pike on the way to meet my wife for a Valentine's dinner at Naples Italian Restaurant. I held little hope for finding anything at that time of the evening on February 14th, but I was pleasantly surprised to still be able to purchase a nice bouquet. We met and had a lovely evening, just a young couple still in the first few years of marriage. A family had been considered, but was still in the future.

I was able to find my way to the waiting room in the hospital. Walking down the halls I felt in a bit of a daze, having only a few moments before held my newborn son in my arms for the first time. For some reason I was wearing a thick hooded sweatshirt, and the bulk of the fabric made it difficult to feel the sensation of small limbs, small body. But he was there, full of life, examining the world it had just been born into. I had handed him back to my wife, and went out to tell the good news to my parents and her father (her mother had been in the birthing room with us).

My dad was sitting down, my father-in-law standing nearby. My mom was not in sight, having gone to get a Coke I believe. I smiled wearily and sat down next to my dad. I gave them the good news, relaying the vital statistics that I could recall through the fog. I don't recall at what point it happened, but I finally lost control and dissolved into tears of joy - racking sobs of release and utter joy at the culmination of such a journey. I leaned against dad's shoulder and he put his arms around me with great warmth. My mom chose that moment to return, and I instantly was fearful she might get the wrong idea and think the worst had happened. I straightened up, dried my eyes and told her everything was fine, he was here and he was wonderful.

He was here and he was wonderful.

Well, he still is. Today, Brainyboy turns 10. He's a star student in the fourth grade, a wonderful older brother, a born musician and comedian blessed with a comedic timing to rival mine. He has a tender heart and a warm smile. His teacher tells me he is notable for welcoming new kids in his class and making them feel at home. He's not blessed with particular athletic ability, but he loves to run and loves to compete which is all I care about. He is a good soul, a good boy, a good man.

He's ten today, and before he went to bed last night I told him how proud I was of him.