So Long, Leo, and Thanks For All the Cheese 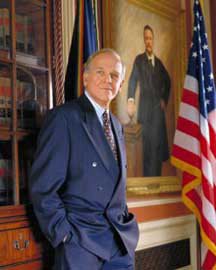 "John Spencer, who played a dedicated politico on "The West Wing" who survived a serious illness to run for vice president, died of a heart attack Friday, his publicist said. Spencer, 58, died at a Los Angeles hospital, said publicist Ron Hofmann. He would have been 59 next week."

This is a real kick in the teeth, as John played former Chief of Staff and current VP Candidate Leo McGarry with warmth, humor, and style. He's one of the main reasons I started watching The West Wing, as I remember enjoying him as Tommy Maloney on L.A. Law these many years ago.

I can't imagine what The West Wing will do without him. They wouldn't dare replace the actor because he's too high profile a character. If they write him out of the show before the presidential election (which will likely be at the end of the current season) I don't see how the Santos campaign can recover and win - and if that's the plan, for Santos to win, it will almost seem contrived if he does. I don't know. Whatever they do, I hope it's with class and respect for the character and he doesn't just become a plot point.

This guy's walking down the street when he falls in a hole. The walls are so steep he can't get out.

A doctor passes by and the guy shouts up, 'Hey you. Can you help me out?' The doctor writes a prescription, throws it down in the hole and moves on.

Then a priest comes along and the guy shouts up, 'Father, I'm down in this hole can you help me out?' The priest writes out a prayer, throws it down in the hole and moves on

Then a friend walks by, 'Hey, Joe, it's me can you help me out?' And the friend jumps in the hole. Our guy says, 'Are you stupid? Now we're both down here.' The friend says, 'Yeah, but I've been down here before and I know the way out.'