Ok, bear with me. This is going to be one of those posts my kids are going to Google, or Googleplex, or whatever, 20 years from now and think, "My dad posted about that??? What a fleeble." 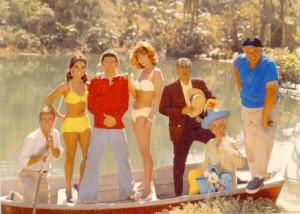 Good ole' Sheila, who has stressful memories of Gilligan's Island from when she was a kid, has started a great discussion about the show.

Imagine a world where there was no color red. At least, our eyes couldn't make out the correct wavelength for the color red. The visible spectrum started at violet and ended somewhere around yellow-orange. Nothing red exists, and everything that was red in our world is yellow-orange (not a bad deal for a UT fan).

Now try to understand, or even comprehend the color red. It can't be done, because it has to exist in nature in order to be conceptualized. If it doesn't exist as part of the natural world, it doesn't exist period.

Here's another example (bear with me). Try imagine writing the description of whalesong to someone who's been deaf their whole life. Sound is such an alien concept if can't be understood anywhere near what it actually is like in real life. The concept is out of their microcosm.

So it is (here we go) on Gilligan's Island. These poor people live in a world, or at least an island where there is no procreation. No sex, no sexual desire, really - only vague teasing, winks, come-ons and suggestion. They live on a permanent junior high school, and that's the limit of their reality. Just as if they lived in a world with no red or whalesong, their world exists without anything less chaste than a sexy walk or a bare midriff. I'm not sure Ginger ever really even showed that much cleavage - all her sexuality was bound up in that little beauty mark.

So every time the redhead tried to get something she wanted with Gilligan:

(whispering seductively) "Gilligan...don't you want to let me have the radio you're guarding in the hut? So I can listen to the Hollywood news...please, Gilly-willy-willigan?"

She'd just let loose the charm and give Gilligan the vapors (and usually knock him cold on a nearby bamboo pole). That was the limit of the affection they could show to each other.

Then there are the Howell's - they were actually married, but did we ever see anything between them that hinted....ok, we won't go there. But I never saw anything more than a simple frou-frou kiss between them. They even had twin beds in their hut, a la Rob and Laura Petrie (which I'm sure Dick Van Dyke still regrets to this day...).

So these poor, poor people really aren't so unlucky after all - the next time you watch the show, don't cry for them, America. It's not that they ain't gettin' any. It's just that they don't know they can....
Posted by Barry Wallace at 1:24:00 PM