Found at Sheila's, here are my Top 10 Sports Moments that I saw as they happened, either in person or on TV. Obviously it's going to be weighted heavily toward the Vols, but I'm going to try and be fair and consolidate. I also apologize if I don't remember the exact names of some of the players involved.

1) The 1998/1999 UT/Florida State Fiesta Bowl: Peerless Price catching the long TD pass that sealed the victory, plus the great shot of Peerless tossing his helmet in the air as the final seconds ticked down, and finally John Ward making the historic announcement, "The National Champion is clad in Big Orange!" 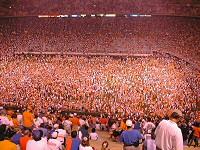 2) Other moments from 1998 UT: "And the kick is in the air, the kick is...NO-SIR-EEE! NO-SIR-EEEE!! Final Score: Tennessee 20, Florida 17.. Pandemonium Reigns!"; Arkansas QB Clint Stoerner puts the ball on the ground when they had the game in hand, and Travis Henry took control and ground out the winning TD; Jeff Hall's last second game-winning kick against Syracuse

3) The Music City Miracle. While I watched the end of the Titans/Bills game, all seemed lost. My wife had fallen asleep on the sofa, and it was just me in the living room. When the runback play began to unfold, I had to completely silence myself so as not to wake her up. I jumped up and down like a madman, pumping my arms - in complete silence. Honorable Mention: Kevin Dyson's one-yard-short lunge at the end of the 2000 Super Bowl that might have scored the game-tying TD.

4) 1999 Atlanta Braves/SF Giants game. Memorable only for the ending, but what an ending. Inaugural year at Turner Field...game tied 0-0 going into the bottom of the ninth, I think it was Fred McGriff hits a solo homer to win the game. Crowd goes as crazy as I've ever seen at a football game.

5) Underhanded/please-God-please-don't-let-me-screw-up-this toss from Keith Foulke to first base to win the Boston Red Sox their 2004 World Series title.

6) Duke's Christian Laetner's last second 17-foot basket from the foul line over the head of a Kentucky defender to beat the Wildcats in the 1992 NCAA tournament EAst Regional Finals.

8) 1998 UT Lady Vols come back from around 15 points down to North Carolina in the last 3 or 4 minutes of the game to win and advance to the Final Four. This one was special in that I heard almost all of it on the radio when I was in the car.

9) UT Men come back from 5 points down in final five seconds to win a trip to New York for NIT Finals in 1987. I was in the stands in the pep band for this one.

10) Watching my determined, gutsy, beautiful BrainyBoy v9.5 maneuver through the middle of the pack, dribble the ball so carefully through a crowd of players, break into the clear score the winning goal at the end of regulation for his soccer team last year. This one may just be the best moment of all. :)