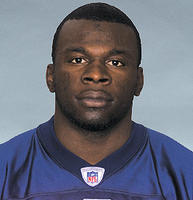 "While there has been no official announcement from either the Bills or Titans, several reports indicate that running back Travis Henry has been traded to Tennessee for a third-round pick in the 2006 draft. "Yeah, it's happened," Henry's sister told The Tennessean. "His agent gave him a phone call and said as of now, he's a Titan." Henry's agent said he had heard the deal was happening, though not from an official with either team. ESPN's Len Pasquarelli said the paperwork for the trade has been forwarded to the NFL offices, and the deal should be announced within the next couple of days."

a) a star running back at the University of Tennessee
b) instrumental in UT's 1998 National Championship season
c) the current record holder for most attempts (556), most yards (3,078) and most 100-yard plus games (15) at UT
d) an underappreciated member of the Buffalo Bills who ran for over 1,300 yards in 2002 and 2003, and who was recently shoved aside by a punk running back from the University of Miami of all places...